Remember that scrap blanket I had mentioned over a year ago? I finished it last week!

I am happy with how it came out. I really enjoyed knitting it and seeing it grow. It really was the ideal TV knitting. I enjoyed making it so much I am kinda bummed I don’t have anymore to knit. I might make another one some day, just smaller and I would stick to one color (a ombre effect would be super keen!). I’d love to make a grey scale one as I think it would stunning in neutrals but I do not knit with black yarn if I can help it. My eyes are getting to old for that. I have yet to actually measure it or count how many squares there.

Pattern is Memory Blanket by TikkiKnits (Ravelry link). I also used her blog post here to help me figure out how to do each square in the beginning. Worried about sewing it all up? There are is no sewing! You knit each square as you go along. You only have ends to weave in. Isn’t that great?

On with the photos. I know that’s what everyone wants. Clicking on first photo will bring you to my Rav project page. 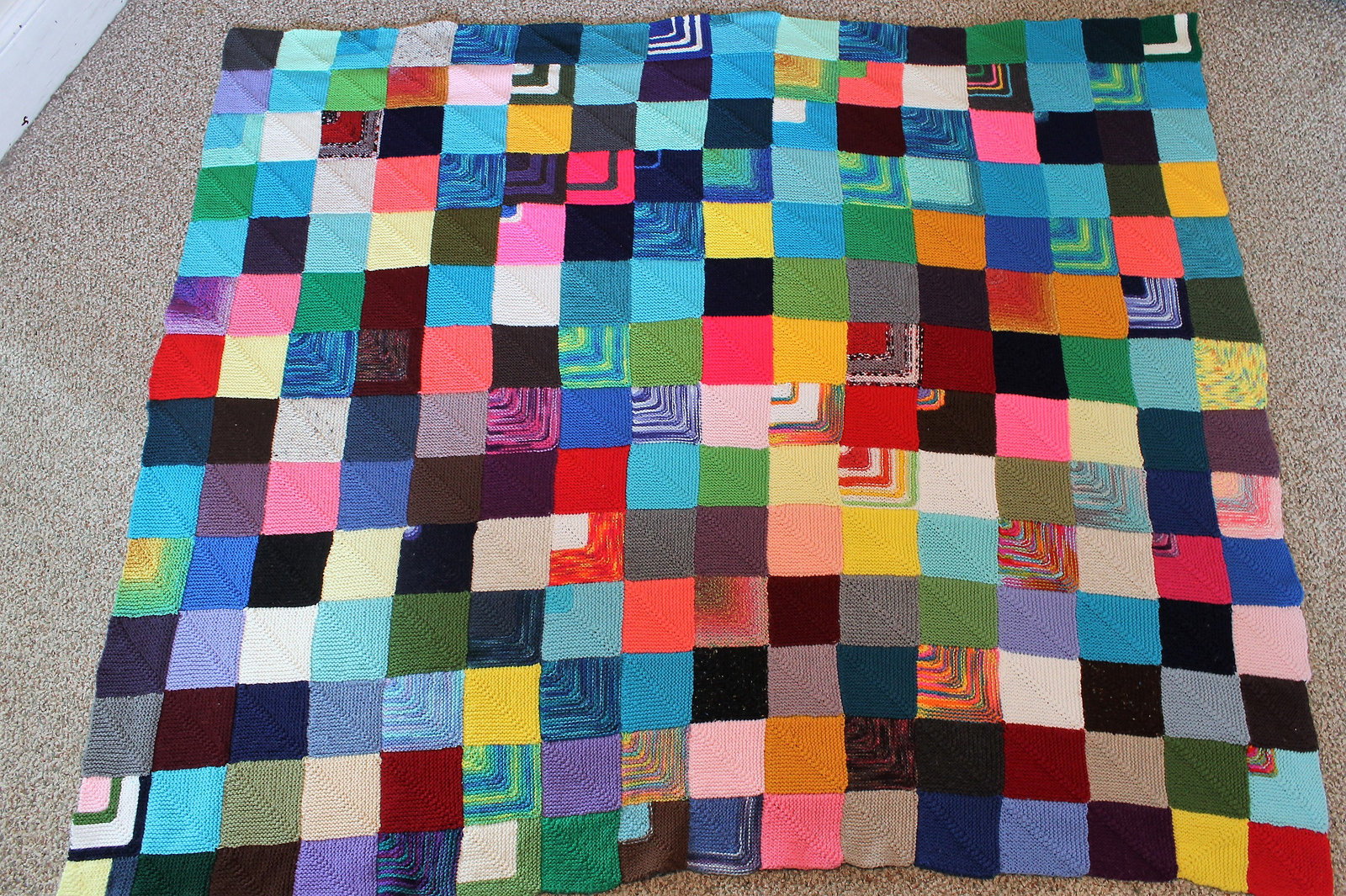 With Clemmy (when they were both smaller) 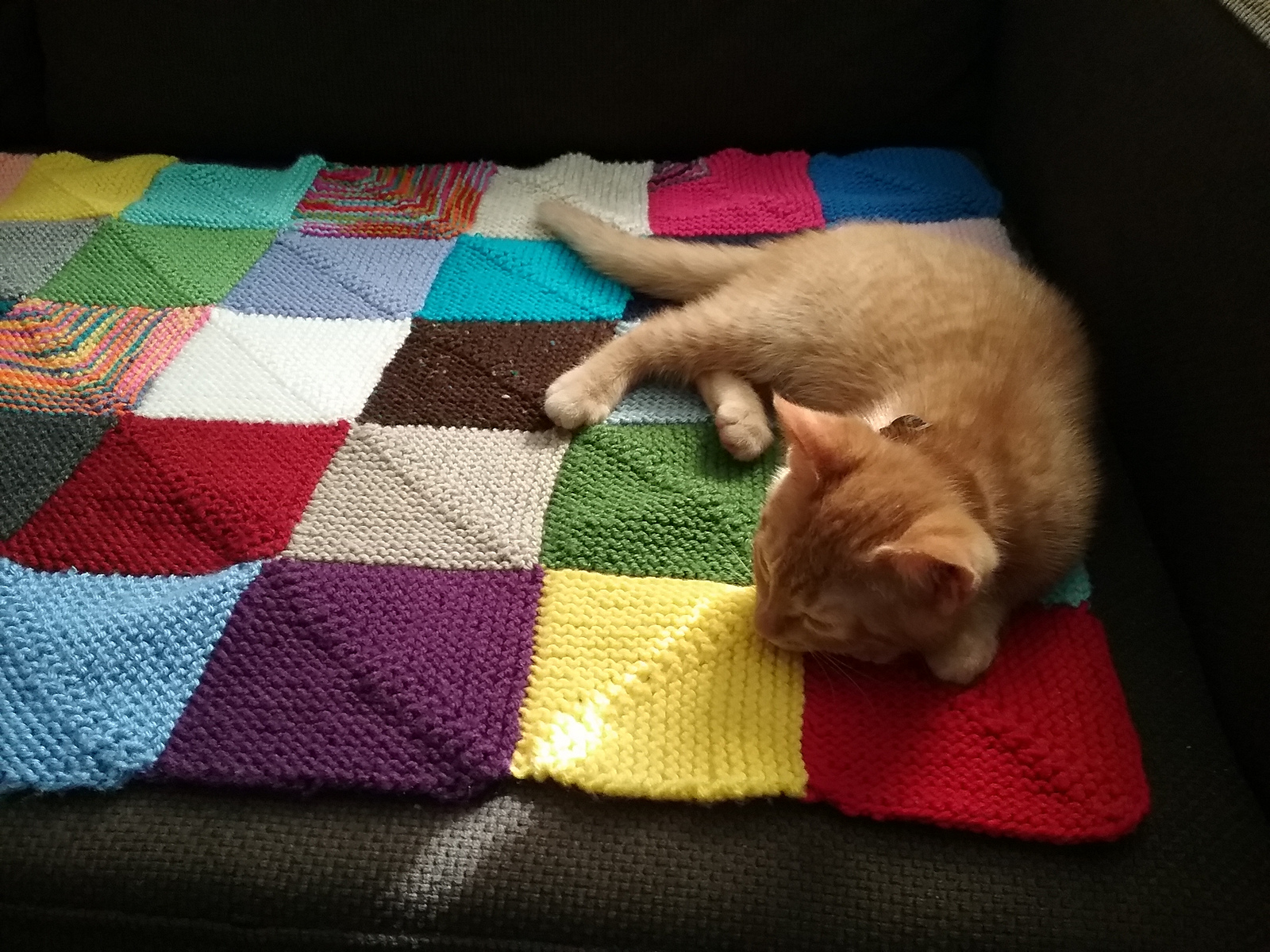 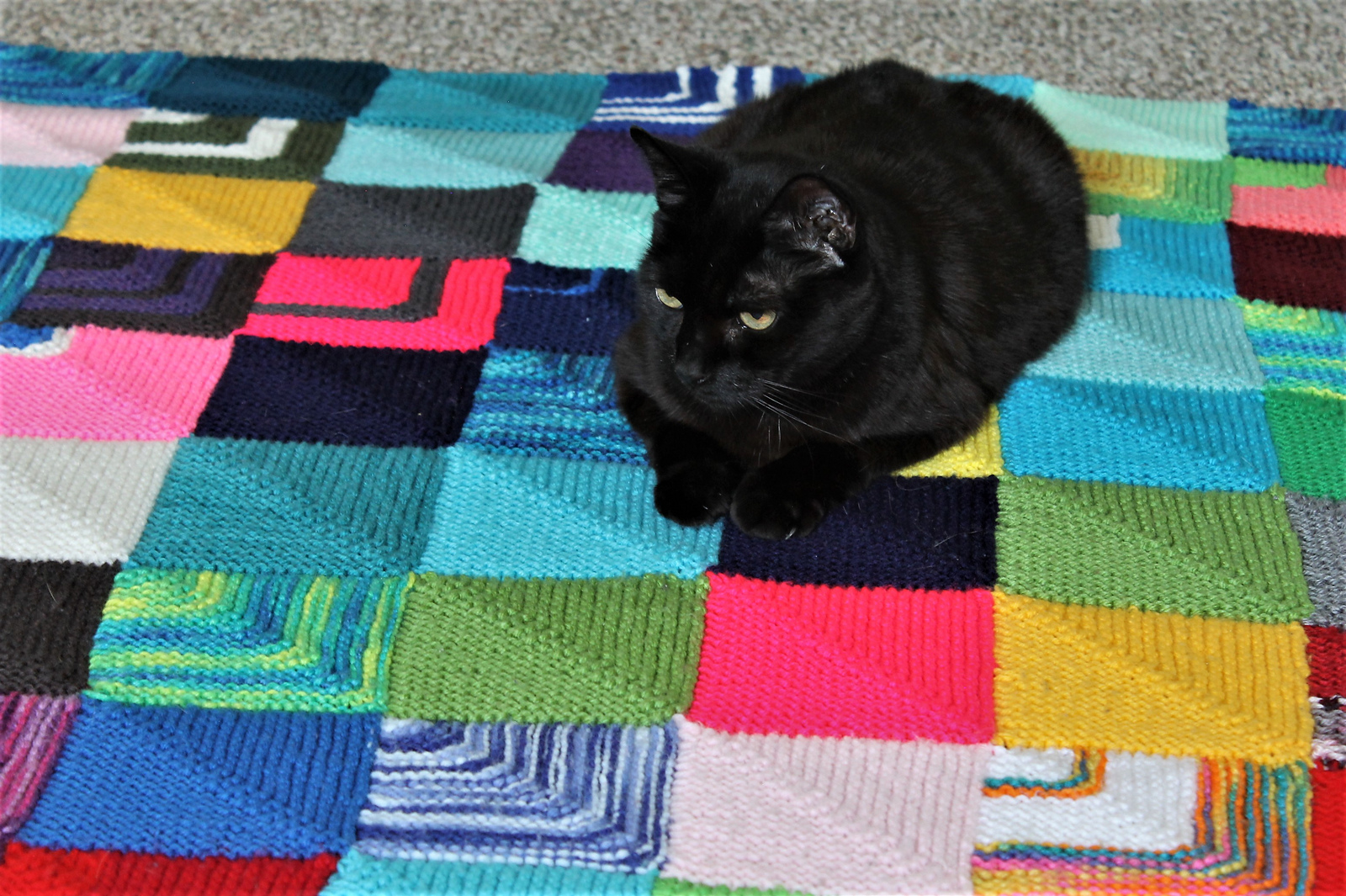 This is probably my favourite photo of it. 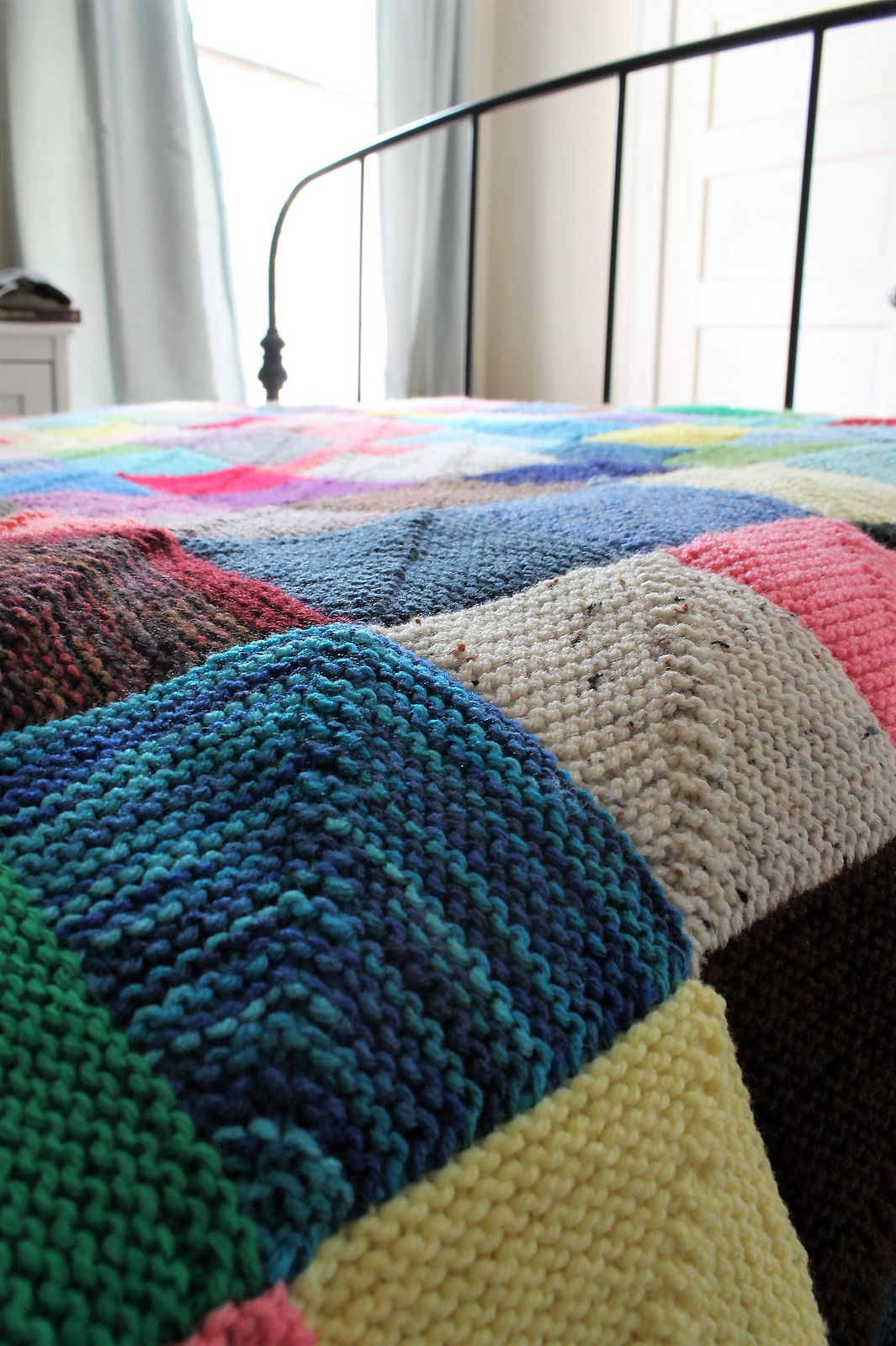 These days you can find me mostly on Instagram . Cole and Clem have their own IG as well!

Okay, one more picture. :) Doesn’t it look so cozy? I think it looks like someone’s grandma’s blanket in the best way. Very hygge like that. 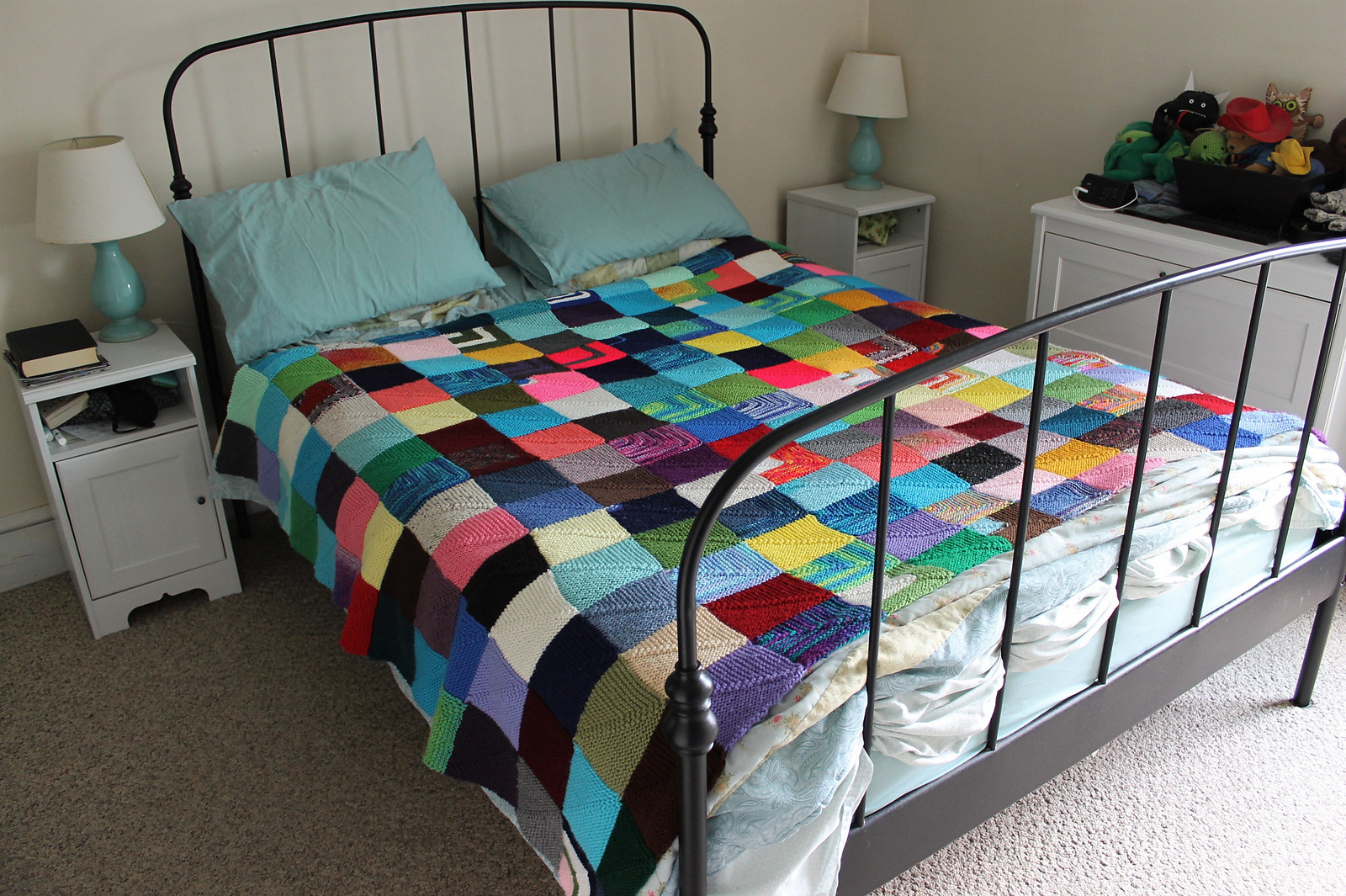 A few weeks ago we made tomtes (gnomes). It was a bit fiddly getting the hats just right but dang, they are cute. We used a few tutorials found on Pinterest to make them. They are currently hanging out in the bathroom.

I made myself a pussy hat last month. It was fun to make and once I got the cast on right (German Twist which is fiddly like a long tail cast on), took just a few days. I wear it most days that it’s cold enough for a hat.

I knit it in the round and based it off of my pink hat from last year per some helpful projects over on Ravelry.

I blocked Harry’s cable scarf but have not gotten photos of him wearing it, yet.

The blanket is coming along. I am not sure how many squares I’ve done. This is the last picture I have on the project page for it taken around Christmas.

I’ve made a few dishcloths as well.

Now I’m working on a Jayne Cobb hat for Harry and the blanket of course.

END_OF_DOCUMENT_TOKEN_TO_BE_REPLACED

I have worked on finishing languishing knitting projects (all images link to my Ravelry).

It took me two years, but I finally finished the cabled scarf I was making for Harry. It needs to get blocked before he can wear it, but it’s done. Lots of mistakes in it but as we say in knitting world, lots of love is in it. One mistake that I didn’t even realize until I was about six inches before finishing was I was skipping a whole first part of the repeat when going to the second. Whoops. I can’t tell and neither can he which really is all that matters.

Today I seamed up the grey infinity scarf I was making for myself. I had finished knitting it in March  but it needed to be seamed up. The issue was doing a Kitchener stitch in the round (FYI – there is only ONE YouTube video on doing it that I could find). Determined to get it done I tried four times before going to an LYS last week asking for help.

The blue loomed cowl sat for months (eh hem a year or more) because I was afraid of finishing it wrong. I don’t know why, it was actually pretty easy once I watched a video. I think using a crochet hook scared me. Also,  because I’m a tight knitter I was worried about doing it too tight (I think I did). I am not sure how much I will wear this as my claustrophobia is an issue with  tight things around my neck. I used the same yarn Harry did when he loomed a hat for me.

As of now the only things OTN is a sun dishcloth which I hope to finish by the end of the month and the scrap blanket. So, going into the new year I will only have one project that I will be working on which a long-term thing. Feels good.

I am not sure what I want to work on next year. When looking at what I’ve done this year it is not much. 2013 was a prolific knitting year for me, 22 things. Most of them small but still that’s a lot! I might try cabling without a needle. I might try making a cloche hat since everyone I’ve every seen in stores is made of wool. Maybe I’ll dig into the queue and make stuff that has been there since I first got on Ravelry (next year will make ten years!).

Hey everyone! Sorry for not posting lately.

Our computer had given us issues for a long time (taking forever to boot up, etc) which would make me not want to bother trying to do much of anything on it. Then we got a new kitten which sucked up a lot of time and attention. Don’t want to do anything but stare at her cute face! Lastly I have had acid reflux issues. It started right before my birthday and almost six months later finally get some relief.  To quote the doctor, “It’s just heartburn.” There is no JUST about it for anyone suffering from it, let me tell ya.

As a result from the reflux, I had to change how and what I ate so I could actually eat w/o being in pain. That has resulted in me loosing about thirty pounds since June. I have continued my gym going, swimming and occasional yoga as well. I did a 28 Day Plank Challenge (modified due to wrists and spine) which I am sure helped a bit as well. I am happy for the weight loss. I am seeing a number I have not seen in about seventeen years.  I am on the tail end of the elimination diet. I have reintroduced a lot of food back. I am able to eat most things. Some in moderation and a just a few not at all (tomatoes, which I should not eat anyway because they cause inflammation in my hips).

This summer was the first time in my life that I was able to eat fish…and like it. I eat sushi now! I prefer raw to cooked. I stick with tuna or salmon. Hey! It’s something! Japan, here I come!

The computer died over this past weekend. Which was also our 17th Dateiversary. We got a lovely new one.

Clementine will be six months old this weekend. She has gotten so big! She and Cole are doing a little better together but they definitely have their moments. He is old and a curmudgeon and wants to be left alone. Clem is a kitten and full of energy. She want to play. She is a cuddle bug, loves to be picked up and paid attention to.

Knitting wise I have worked on the scrap blanket pretty diligently since March. Even in the summer.

Cole and Clem do, too.

I hope to get back into the swing of things soon. Thanks to everyone who is following!

Please do not take any photos that I post as my own. All rights reserved ©